If You Ever go to Louisville

Behind a bustling shopping mall on the east side of Louisville, Kentucky, right next to the parking lot, is an old family cemetery.  Surrounded by a stone wall, it contains a few dozen graves – the last resting place of the family who once owned the land on which the shopping center sits.  The shopping center is named Oxmoor Mall, and the land it sits on is part of the original Oxmoor plantation – the ancestral home of the Bullitt family.

The founder of Oxmoor in 1785 was young Alexander Scott Bullitt, of Prince William County, Virginia.  Alexander’s new 15 year old wife was Priscilla, whose maiden name was Christian.  She was the eldest daughter of William Christian, of Augusta County Virginia, who had given her and her new husband the land from which Oxmoor would emerge.  William Christian had come to Louisville, then a part of western Virginia, about 1784 to settle on lands he obtained in Kentucky after many years of military and political service, both to his state and to his brother-in-law, a gentleman by the name of Patrick Henry.

William Christian’s links to colonial Virginia and its military history are many and interesting, but for purposes of this story, you should know that if you do drive around to the back of Oxmoor Mall on the Shelbyville Road just east of Louisville, you’ll have the opportunity to pause at the gravesite of Colonel William Christian, the first Executive Officer and second Commander of the First Virginia Regiment of the Continental Line.

A young William Christian tied his future to that of his brother-in-law Patrick Henry in the late 1760’s. After the French & Indian War, where he served with Washington in the Virginia militia, Christian studied law under Henry.  There he met and married Henry’s sister Anne.  He became a member of the Virginia Assembly, served in Lord Dunmore’s War against the Indians, and when the Revolution broke out in 1775, and Patrick Henry was named Commander of the First Virginia Regiment, he had his brother-in-law William named as Deputy Commander, with date of rank from September 1775.

While Patrick Henry was the first Commander of the first Regiment from Virginia, it is not often mentioned that he left the post very early, even before the unit marched north to join Washington’s Army.  In August of 1775, when Henry was elected Commander by the Virginia Assembly, he not only was made Colonel of the First Regiment, but Commander-in-Chief of all Virginia forces to follow.  Henry and Christian went to Williamsburg and began the organization and training of the initial two regiments (First and Second Virginia Regiments) authorized by the Assembly.  They set up the first camp just outside Williamsburg, on the green behind the College of William & Mary.

From September 1775 until February 1776, Henry and Christian worked with arriving volunteers to build the two regiments. Since Henry was more politician than military leader, it was actually the experienced military commander William Christian who built the individual companies of militia and volunteers into a competent fighting force which became the First and Second Virginia.  In February, papers arrived from the Continental Congress in Philadelphia, accepting all Virginia regiments into the Continental Line.  Patrick Henry was named Colonel of the First Virginia Regiment.  Now he faced a decision.  He was already Commander-in-Chief of all Virginia forces.  If he accepted service in the Continental Army, he would be only the Colonel of a single regiment.  Pride and ambition won out, and Henry resigned his Colonelcy of the First Virginia on February 28th, 1776.  It was a smart move on several counts from his perspective – it allowed him to remain a potent force in Virginia politics as well as the colony’s military commander, and three months later, in May 1776, he was elected the first Governor of the State of Virginia.

When Colonel Henry stepped down from command of the First Virginia, that role fell to his deputy, Colonel William Christian, who officially assumed the post effective March 18, 1776.  Command of all Virginia Continental forces was given to BGen. Andrew Lewis.  But Christian’s time as Commander was short.  Apparently his ties to his in-laws were strong, and by the time the First Virginia marched north to join Washington’s Army, command had devolved to LCol. Frances Eppes.  On June 5, less than three months after taking command, William Christian followed the lead of his brother-in-law and resigned his Continental commission.  In July 1776, he was appointed a Colonel of Virginia Militia.  He spent the rest of the War at his home occasionally leading expeditions against Indian and Tory bands threatening the Shenandoah Valley.

As the War ended, he served in the Virginia legislature, and then moved to Kentucky in 1785, settling on 2200 acres about 15 miles east of the small fort and settlement at the Falls of the Ohio, recently named Louisville.  He built a home for his family, helped organize a local militia, and saw his daughter Priscilla marry a local boy named Alexander Bullitt.  In April, 1786, a band of Indians had crossed the Ohio River and stolen some cattle in Christian’s neighborhood.  Quickly organizing his militia for pursuit, Christian caught up with the Indians about twenty miles into what is now southern Indiana.  The entire Indian party was killed, with two casualties among the Kentuckians.  One of them was Colonel William Christian, who fell from a rifle bullet to the head, and died in the arms of his son-in-law Alexander Bullitt, on the 9th of April, 1786.  He was returned to his daughter’s home and buried in the family plot at Oxmoor.  He’s still there, and if you’re ever shopping at Oxmoor Mall, stop by and visit the man who was largely responsible for the creation of the First Virginia Regiment of the Continental Line. 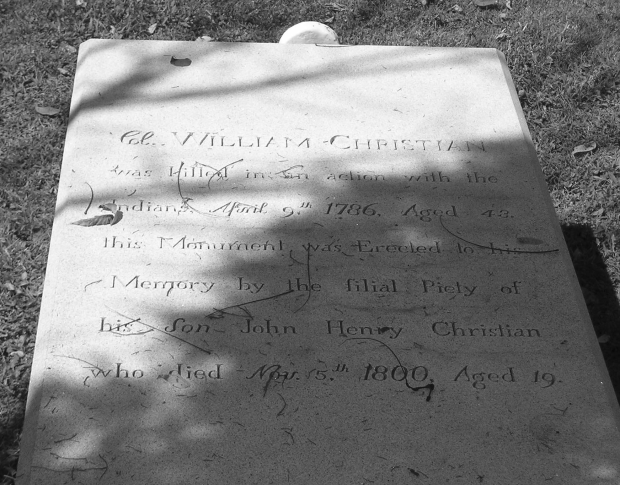