The town of Niagara on the Lake, in Canada, just across the Niagara River from Fort Niagara (NOTL for short) was a hotbed of English loyalist sentiments (it was home to Col. John “Beast” Butler and Col. John Graves Simcoe), and finding myself there as part of a First Virginia Regiment event, I visited several museums in the town (including Butler Barracks and Fort George) which highlighted British Revolutionary War experiences. A third museum that might have been missed by many was the Niagara Historical Museum. This is the local town historical center, and in it, I found a piece of very interesting history – with ties to another reenactment held in recent years, that of Oriskany, NY.

I went to the museum because I saw an ad for a War of 1812 military display, which would last only through the summer. Sure enough, they had half-dozen original British uniforms and some weapons from the War. But on the way to the 1812 room, I passed another uniform display that brought me to a stop. It was not 1812, but clearly (to a reenactor anyway) a uniform coat from the Rev War period.

Many members of the Regiment, interested in the clothing and equipment of our period, are always looking for original garments that provide a glimpse into the styles, materials and sewing techniques of the Revolutionary period that we try to emulate. As most of us know, there are not many original garments around to look at or examine. You can imagine my great surprise when I saw this coat in absolutely wonderful condition. 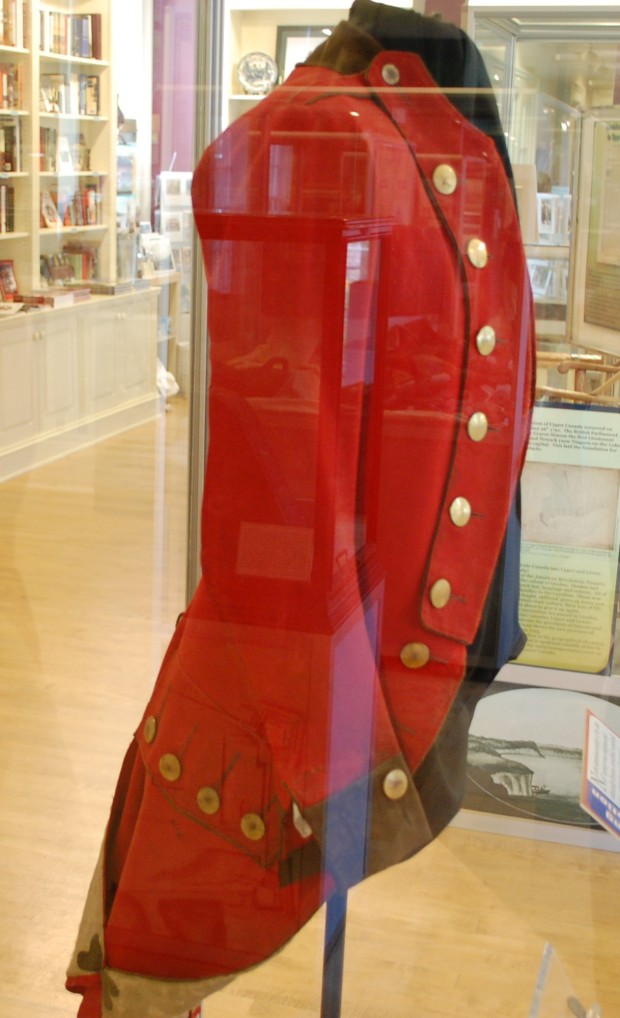 I asked the museum staff about it, since the placard description in the case was pretty sparse. They kindly went to their computer and retrieved the documentation for the coat. This is the story:

In 1775, John Butler was Deputy Superintendent of the Northern Indian Department at Fort Niagara, across the Niagara River from NOTL in what is now New York. His job was military liaison for the British government related to activities with the 6 Nations tribes of the area, principally the Iroquois and Seneca. Once the Revolutionary War started, his task was the creation of a force of Indians under Joseph Brant, Old Smoke, and Cornplanter who were loyal to the Crown. On June 5, 1777 he received instructions to send as many Indians as he could to Fort Oswego for an attack on Fort Stanwix as a part of the Saratoga campaign under General Burgoyne. As we learned from the experience of reenacting it, Butler led those Indians and a small number of Loyalists in a successful ambush known as the Battle of Oriskany. As a result of his success, he was commissioned a lieutenant colonel and given authority to raise his own regiment, which became known as Butler’s Rangers, initially with a strength of eight companies. For the remainder of the War, Butler continued to lead a combined force of Indians and Ranger loyalists, operating from Fort Niagara and points west along the Canadian-American border. After the War, he and many of his men settled in the NOTL area on the Canadian side of the Niagara River.

The winter quarters for this force were constructed on the west bank of the Niagara River in what is now NOTL. Although the buildings that stand in the town now are traditionally known as “Butler’s Barracks”, they are not the original barracks and never housed Butler’s Rangers. They were built in the years following the War of 1812 to house the offices of the Indian Department, in which Col. Butler and Captain Servus had served.

After the War ended, like many of Butler’s unit of loyalists, Daniel Servos settled in the NOTL area. He built and operated a grist mill, and by the time of his death in 1803, had founded a family dynasty that still lives in the area today. He is buried in the United Empire Loyalists cemetery in NOTL, and in 1898, one of his descendants donated his uniform to the NOTL historical society and that is the uniform I saw on display.